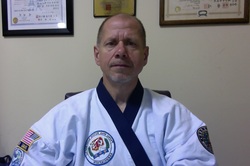 With over 40 years in the Martial Arts and a full time Instructor and Studio owner since 1985, Kwan Jang Nim Voelker is a wealth of knowledge.  He is the President and Founder of Pyong Hwa Kunin Tang Soo Do in 1998 and Co-Founded the International Goodwill Tang Soo Do Association (IGTSDA) in 2000.  He is an Executive Member of the Board of Directors and Co-Founder of the United States Goodwill Tang Soo Do Assocoiation (USA affliate of IGTSDA), and is the Vice President to the United States chapter of the World Dang Soo Do Union.

Kwan Jang Nim Voelker is an 8th Dan and a student of Great Grandmaster Song Ki Kim.  He has trained under many of the greats of Tang Soo Do; including KJN Charles Ferraro (his 1st TSD instructor), KJN Hwang Hyun Chul, KJN Andy Ah Po, KJN Robert Beaudoin and KJN Shin Jae Chul.  He is a 5th Dan in Shio Karano JuJitsu under Soke Clement Riedner and a 1st Dan in USMA Judo under O'Sensei Phil Porter and Soke John Larlee.

In addition to teaching full time at Middlesex Tang Soo Do Academy, Kwan Jang Nim Voelker has instructed Fight Cut Combatives to Soldiers stationed at Fort Bragg in North Carolina.  He has taught Personal Defense and Martial Arts Courses to the Cadets at the Coast Guard Academy in New London, Connecticut.  Kwan Jang Nim Voelker has coached TEAM USA in 1999 England, 2001 Greece, 2002 Holland, 2003 England, 2005 South Africa, 2006 Greece, 2007 USA and 2010 Korea .  He is the Executive Director of the USGTSDA National Championships.

Kwan Jang Nim Voelker has often been heard to say, “we don’t just teach kick and punch, we develop champions for life”.